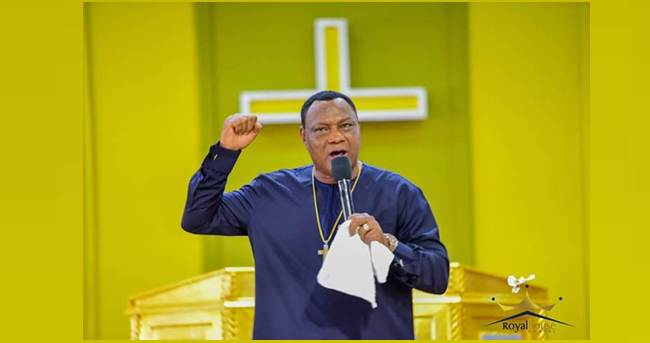 The founder and leader of Royal House Chapel International, Rev. Sam Korankye Ankrah, has appealed to President Nana Addo Dankwa Akufo-Addo to pay the contractors in his church so that they can pay their tithe.

The man of God’s appeal to the President follows calls by the Road Contractors Association of Ghana on the government to pay all arrears due its members.

Delivering his sermon on Sunday, 16 September 2019, Rev Korankye Ankrah appealed to the President thus: “Mr President, I have contractors and businessmen in my church, they must be paid for the work they have done so they can pay tithe and offerings so that we can go to Tamale Prisons, so we can go to Tamale University and hold crusades, so that we can preach the gospel so that we can help the poor, so that we can pay the school fees of the intelligent and the people who have graduated from the Free SHS who are now hanging, queueing, waiting for money to go to the university. Mr President, please pay my contractors for me, I beg, pay them, pay them”.

According to road contractors across the country, the government has failed to pay its members for work done in the past five years.

Secretary to the Chartered Institute of Buildings (CIOB), Reginald Obeng, revealed that some of their members have died due to the failure of the government to pay them.

The member of the Ghana Chamber of Construction Industry explained that the banks and other financial institutions that gave loans to their members for the works are chasing after them.

Mr Obeng appealed to the Akufo-Addo government to pay the debt inherited from the Mahama administration.

Speaking to Kwabena Prah Jnr, host of Ghana Yensom on Accra100.5FM on Thursday, 11 July 2019, Mr Obeng said: “The properties of our members, including houses used as collateral, are being confiscated by the banks and the financial institutions and this situation is rendering them homeless. Some are also dying out of frustration.”

He added: “We need a roadmap as to how the government will pay us. We know this government inherited the situation but it has been three years and we expect them to act quickly and pay us.

“They told us they were doing audits of the projects because the contracts were awarded when there were no secure funds.

“Some of the projects their members did for which we are not being paid include the E-blocks, CHPS compounds and roads in most of the districts across the country,” he added.

Mr Obeng further said a meeting has been scheduled with the Finance Ministry to deal with the situation.