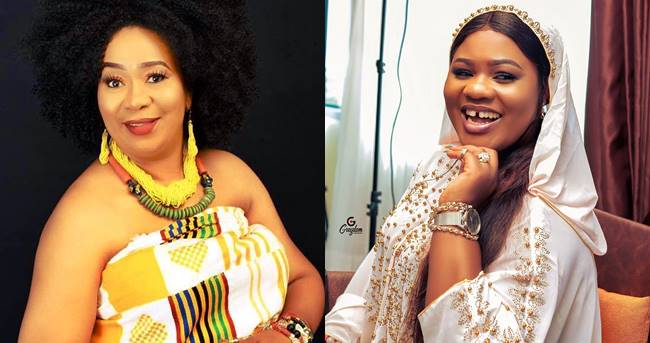 In an interview with Ola Michael on Neat 100.9FM and monitored by www.entertainmentgh.com, the veteran musician snarled at the younger musician over comments the latter expressed in an earlier interview granted to Doreen Avio on Hitz 103.9FM.

The management of Stella Seal issued a disclaimer on the ‘Obaapa @20’ event poster that had her (Seal) on the list of performers without her consent and in reacting to that move, Obaapa Christy told Doreen Avio that, she placed the likes of Stella Seal and Tagoe Sisters and other veterans on her upcoming event to honour them, which would also help ‘ give them some ‘exposure’.

On why she hasn’t called Stella Seal, Obaapa intimated that, she dreaded the veteran musician recording the conversation.

Such utterances riled up the veteran musician in her interview with Ola Michael.

“She is a kid. She didn’t get proper training and upbringing. I need to discipline her.”

“What the hell? How can you celebrate your veterans and be this rude and disrespectful?” – she fumed.

She also sounded a warning;

“If you are going to buy a ticket because of me and Tagoe Sisters, don’t go.”

She had some admonition for Obaapa Christy;

“She needs to apologize and do the needful.”