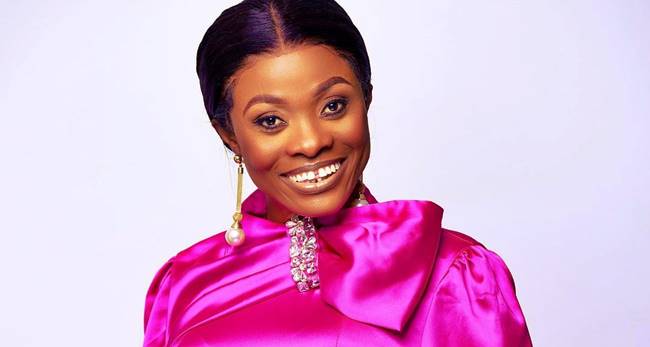 She begged President Akufo-Addo and Otumfuo Osei Tutu II for Ghana to organise its own version of the late Queen’s funeral hosted by the Asantes.

Speaking in a Tiktok video, Diana Asamoah pleaded with the overlord of the Asante Kingdom, Nana Otumfuo Osei Tutu II, to organize a memorable funeral for the Queen because it’s a well-known fact that Asantes are peerless when it comes to the organisation of befitting funerals.

According to Diana Asamoah, she’s much aware that the English Royal Family can’t organize the late Queen’s funeral like Asantes.

Therefore, that’s the main reason she wants Otumfuo Osei Tutu II to host an enviable funeral ceremony in Ghana to bless the memory of Queen Elizabeth II in a more appropriate manner.

The gospel singer begged Nana Addo to talk to Otumfuo on her behalf so that her proposal will be considered by the respected king.

Queen Elizabeth II, queen of the United Kingdom and 14 other sovereign countries has passed on.

She died on Thursday, September 8, 2022, at Balmoral Castle in Scotland at the age of 96, after 70 years of reigning as queen.

Buckingham Palace earlier announced that the Queen was under medical supervision at Balmoral after doctors became concerned for her health.

“Following further evaluation this morning, the Queen’s doctors are concerned for Her Majesty’s health and have recommended she remain under medical supervision,” a statement said, adding: “the Queen remains comfortable and at Balmoral.”

According to the BBC, the announcement comes after the Queen, 96, pulled out of the Privy Council on Wednesday, with doctors advising her to rest.