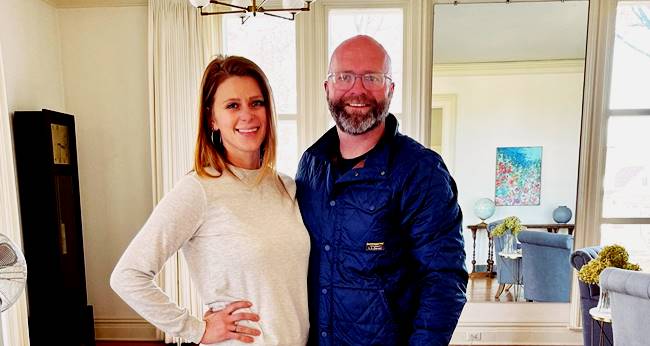 The founder of the multi-campus Embrace Church in South Dakota, Pastor Adam Weber, says he won’t stop preaching in his skinny jeans despite being recently rebuked by a Christian for wearing the “offensive” pants that make him look like he’s “trying on purpose to be sexy” at his pulpit.

Weber, who says 99% of the letters and messages he receives about his ministry are “wonderful,” recently shared an anonymous letter he received from the offended Christian on Facebook, but insisted that “I think I’ll keep wearing my skinny jeans. Even if they’re … sexy.”

In the letter written in red ink, Weber’s critic called his choice of fashion for preaching “completely offensive” and “morally wrong.”

“As head pastor do you really think it is appropriate to wear skinny leg jeans to preach? Since when do men wear skinny leg jeans? Where is your common sense? This is an outrage! You are a representative of Jesus Christ!,” the anonymous critic wrote before taking aim at the church’s worship team.

“Certainly you can dress professionally and conservatively. YOU ARE A ROLE MODEL FOR CRYING OUT LOUD. The praise and worship team should also dress CONSERVATIVELY,” they added.

“This is mandatory being in ministry! This looks like you are trying on purpose to be sexy. JUST DISGUSTING FOR A PASTOR. USE SOME COMMON SENSE. DRESS LIKE YOU SHOULD! You are not in middle school but rather responsible for an entire church.”

Uniqlo, a Japanese designer, manufacturer and retailer, explain on its website that “skinny jeans usually have a snug fit between the legs, and they end in a small leg opening from 9 to 20 in circumference.”

In recent years some conservative pastors have lashed out at pastors wearing skinny jeans, saying it is effeminate. One pastor in a video montage on YouTube said skinny jeans were “invented by the homosexual crowd in the fashion industry so some guy that’s a homosexual could scope ya!”

Thomas F. Booher, pastor of Heritage Reformed Church of Sanford, North Carolina, also argued in a blog post that pastors should not preach in skinny jeans.

“If worship and the church service is to lift us to the heavenlies and the glory and majesty of God, then how can skinny jean wearing pastors reflect this? How can a rock concert atmosphere make us think lofty thoughts of God and Jesus Christ?” he asked. “Conversely, how can a man in a robe droning on without emotion and a funeral atmosphere make us think God is worth praising? Neither reveal to us who God is, and both make God look like something He is not, which is grave sin and even idolatry.”

Despite the opposition to his jeans, Weber said he won’t stop wearing his skinny jeans, noting that such criticisms could make someone become “jaded,” especially at Christians, the Church and Jesus.

“This isn’t Jesus though. So instead of walking away from Jesus, I’ll let it bring me closer to Jesus. I’ve never sent a letter like this. But I have written them many times in my mind (probably even over something really foolish like a pastor’s jeans). I need Jesus just as much as the person who sent this does,” he wrote.

“Also I think I’ll keep wearing my skinny jeans. Even if they’re … sexy?” he said. “I genuinely have no ill will toward the person. I only hope good to come their way. I know when I’m hurting, I think/say/do hurtful things. If you would please pray for them. That God would shower them with His love, grace and kindness today. Thanks friends.”