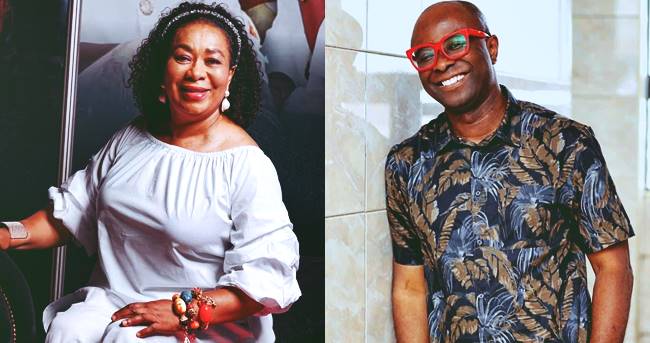 A Peace FM presenter, Kwasi Aboagye, has submitted that a recent stern critique levelled against Obaapa Christy had traces of witchcraft from the side of the accuser, Stella Aba Seal.

Aboagye added that the attack buttresses the long-held view that there is little or no love between gospel artistes in the country.

He said, despite having a very cordial mother-son relationship with Stella Seal, her pronouncements on Obaapa Christy had caused him to lose lots of respect for her.

“The respect I have for Stella Seal has reduced. If I am to be blunt, this attitude borders on witchcraft… apart from the attitude, she ridicules … accuses (Obaapa Christy) of being primitive and a villager.

“Stella Seal has manifested it clearly, that there is no love between gospel artistes. What at all is it? She came to Neat FM just to ridicule Obaapa Christy…” he stressed on Peace FM’s Entertainment Review programme on August 25.

Stella ‘seals’ illegal use of her brand

Stella Aba Seal issued a warning to all stakeholders in the gospel ministry to desist from using her image to publicize their events without her prior consent.

According to the celebrated singer famed for songs including ‘Gyeme Taataa’ and ‘Okura Yen Mu’, she will take on anybody who flouts her directive.

“This goes to all stakeholders, pastors, bishops, archbishops, programme organizers, choirs, whoever you are. Do not put my picture on a flyer without my permission,” she said.

Stella Steal recently called out Obaapa Christy in a Facebook post for using her to ‘lure’ music lovers to her 20th-anniversary show. A livid Stella Seal stated that Obaapa Christy’s decision to put her on an official flyer without her permission was an insult.

She elaborated further on why she took on Obaapa Chrity in an interview with Ola Michael on OKAY FM: “I was even outside the country, just imagine a grown woman like me who has laid the foundation for you.

“I just said that I didn’t know anything about it so I have taken myself out of it. I never said her programme was fake. That particular flyer, Tagoe Sisters who has been advertised has a show on the same day at Akosombo.

“Personally, it is an insult, it is an insult to put me on a ticketed show without my concern. You are taking money and deceiving my lovers. Someone will purposely attend the programme because they want to hear my timeless songs or Daughters of Glorious Jesus and Tagoe Sisters.

“We the older generation of singers have a different clientele and just imagine them coming to the show and feeling disappointed because they didn’t see us. You lied to the public and it will go bad against me. I am speaking for myself…I, Yaa Henewaa, do not like that,” she warned.

On suggestions that Obaapa Christy’s intention was to honour her at the event, the veteran, without mincing words, said the approach was repugnant, to say the least.

“What the hell! How can you celebrate your veterans and be this rude and disrespectful?” she fumed with rage.