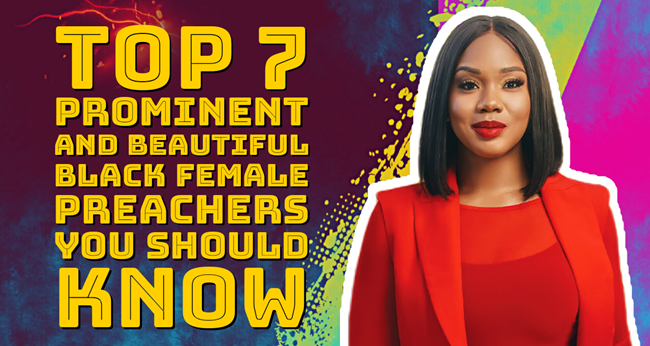 The 21st century appears to be the period of female preachers and pastors who are taking on significant leadership responsibilities in the church to support its expansion, including serving as pastors and starting their own churches.

Despite the fact that male pastors still predominate in the world’s largest churches, an increasing number of women are now leading the way in proclaiming the gospel of Christ through their various callings.
GospelEmpireGh lists the 7 Prominent & Beautiful Black Female Preachers in this video.

Our list of the Top 7 Prominent and Beautiful Black Female Preachers You Should Know is one we are delighted to share with you.

This list of Prominent Black Female Preachers is ranked by their level of prominence, looks, elegance, significant leadership roles, achievements, lifestyle and fashion.

These female preachers and pastors have worked hard to be the finest that they can be as they are inspired and motivated through their faith in Christ.

The gospel of Jesus Christ is being spread by these women using the gifts that God has given them.

We’re proud to present to you our list of the Top 7 Prominent & Beautiful Black Female Preachers You Should Know:

LaTrice Ryan is an author, community leader, and evangelist known by many for her passion and fiery deliverance of the word of God. She is a powerhouse in the pulpit, and in her community encouraging people to discover the potential within. Evangelist Ryan’s passion for God and surrendered lifestyle has led to an anointing to preach and teach the word of God with authority, revelation, and deliverance. Her insightful messages include sobering truths that challenge men and women to pray and cultivate their God-given potential in their personal, spiritual, and professional lives.

Author, minister, and motivational speaker Priscilla Shirer founded Going Beyond Ministries. She holds a master’s degree in biblical studies from Dallas Theological Seminary, and her mission is to teach “the truths of Scripture intellectually.” Shirer personally designs studies for women and teens based on biblical characters and topics including Jonah, Gideon, the Exodus, and discerning God’s voice.

Daughter of Bishop T.D. Jakes, Sarah Jakes Roberts is a firebrand for the women of faith. She and her husband, Touré Roberts, are co-pastors at The Potter’s House at One LA and The Potter’s House Denver. in 2017 Sarah launched Woman Evolve. This ministry seeks to transform women to realize their full potential. Now a wife, mother, businesswoman, and author of four books, Roberts is living proof that our fears and insecurities do not define us.

Dr. Jasmin “Jazz” Sculark, The Daughter of Thunder, is a native of the Republic of Trinidad and Tobago. Dr. Jazz is the Founder and President of Dr. Jazz Ministries and the author of several books.

Cindy Trimm is one of the best-selling author, keynote speaker, and former senator of Bermuda. She is also a sought-after empowerment specialist, revolutionary thinker, and transformational leader. Dr. Cindy has earned a distinguished reputation as a catalyst for change and voice of hope to the nations.

Twelve-time Grammy-winning gospel singer Shirley Caesar is also known as The First Lady of Gospel. She began her music career with The Caravans and later went solo, releasing phenomenal hits such as Faded Rose and I Remember Mama. She also established a non-profit to serve the needy.

Pastor Juanita Bynum has penned several books, such as The Threshing Floor and the No More Sheets series. She has also released gospel albums such as Piece of My Passion.
Hope you enjoyed our list of the Top 7 Prominent & Beautiful Black Female Preachers on Gospel Empire Wired on Gospel Empire TV with Sampson Annan