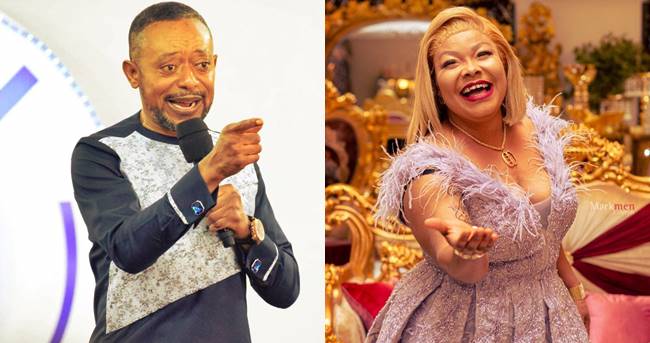 His issue with the two personalities dates back to last year when he was arrested and kept in custody over a public spat he (Owusu-Bempah) got into with Nana Agradaa – a fetish priestess turned preacher.

Speaking during a church sermon days ago, Owusu-Bempah lamented how Akufo-Addo and Bawumia played varying roles in his predicament, from his arrest through to detention and processing for court.

Without mentioning Agradaa’s name explicitly, he referenced an adversary who caused his arrest yet could sit on social media and threaten him with 15-year jail term.

Narrating an incident he had with some political brokers in the Ashanti Region last week, Owusu-Bempah recounted how he got solidarity from his guests.

“’Man of God, God has vindicated you. The person who abused you is now insulting everyone, it shows that you were not the problem.’ She has insulted till it has reached the Archbishop. Ghana is for all of us, not one person. The law affects some people and leaves out others.

“So much so that a woman can sit on social media and threaten to jail Owusu Bempah for 15 years. As for me, I am pained by Akufo-Addo, that order from above that caused me to be handcuffed to a bed, gave me shock,” Owusu-Bempah lamented.

Watch a video of his sermon below, relevant portion starts from 1:59 minutes – 2:01 minutes

Ghana Police Service on Sunday, September 12, 2021, arrested Rev Owusu Bempah and four others, for their involvement in the creation and circulation of multiple videos which contained threats of causing harm and violence.

The police pointed that they were also arrested for brandishing of a weapon, as well as assault, on some police personnel who were injured and currently on medical treatment.

According to the police, the suspects were arrested “after critically analyzing the said videos and based on intelligence gathered”.

Already, two other suspects in connection with the acts are said to be on run with the Police in pursuit of them.

The duo and their followers had at the time been at logger heads, throwing threats and unprintable words at each other on social media.