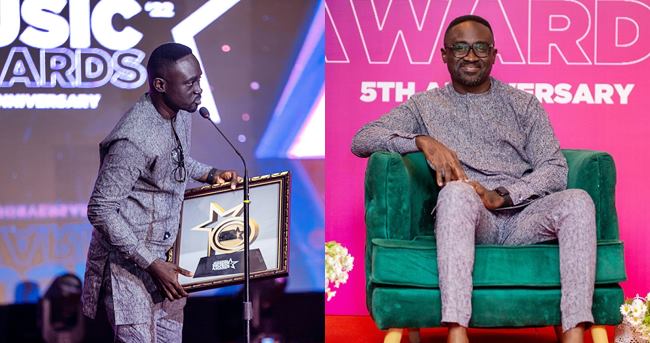 Emanuel Obeng Opoku, known in the showbiz circles as, Adom Kiki, has won the Gospel New Artiste of year at this year’s Ghana National Gospel Music Awards, which was held on Saturday, 7th September, 2022 at the Accra International Conference Centre.

The anointed and talented gospel minister won the award at the colourful event by beating off stiff opposition from the likes of Papa Owura, Prophet Atara and a couple of other gospel artistes.

Adom Kiki released a hit single, “Mesom wo” last year, which has gained massive public acceptance, with huge airplay on TV and on radio.

The KNUST graduate and an entrepreneur, who plays piano at CCC main church, in Ayigya, Kumasi, had three nominations, being the Worship Song of the year (Mɛsom wo), Male Vocalist of the year and the New Gospel Artiste of the year. In his acceptance speech, the father of four beautiful ladies showed his gratitude to God, his spiritual father and head pastor, Rev Ransford Obeng of CCC, his family and the entire congregation of CCC churches worldwide. He also expressed appreciation to Bishop Collins Nyarko of Well of Salvation, Sunyani.

He is out currently with “My Redeemer” which features Oware Jnr.

Adom Kiki hopes to “inspire the generation through gospel songs and remind mankind of our essence on earth”.