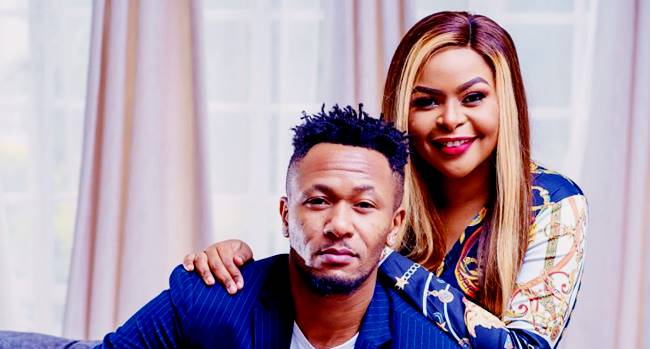 Popular gospel entertainer Samuel Muraya alias DJ Mo has defended his wife, Linet Masiro Munyali, better known as Size 8, who has been facing backlashes over miracles she claims to have performed.

Size 8 has been holding crusades and praying to power, some of them possessed by demons since she was ordained as a poster. She has been casting out demons on public occasions but many Kenyans have not believed this.

In an interview with Mungai Eve, DJ Mo noted that he would be so worried if people were not criticising his wife based on those miracles.

The father of two said his wife performs real miracles; he added that the miracles are not stage-managed as many people believe. “I would be so worried if people didn’t criticise her. Otherwise, I would be like ‘eeh you are doing something wrong’. If the miracles are fake then where are the genuine ones? I have never seen a pastor whose miracles are believed. I would be so worried if everyone clapped for her. I have been with her and I know the miracles are very genuine. I am happy because I am here to support her. I will support her to the end. So if you think it’s clout chasing well and good but on the other end, people are being trustful,” DJ Mo said.

He also claimed that his wife, Size 8, prayed for a strange woman who was sick during their Kibwezi crusade, and the woman was healed. “kuna madam alipona na hata hawajuani. Unajua kama ni kipindi inakuanga imepangwa na wale unajuana nayo. Those people you say can’t perform miracles are the same people that God will use,” he added.

On Sunday, October 2, 2022, during her last crusade in Kibwezi, Size 8 almost fainted on stage after her husband, DJ surprised her while preaching. Surprised, Size 8 hugged her and then asked the crowd to greet her man. “Babe nahubiri hapa, uko sawa (I’m preaching here, are you okay)?” The father of two then took the microphone, greeted the people and said: “Nimekujia bibi yangu amekaa hapa siku tatu (I have come for my wife, she has been here for three days).”

In late 2021, Size 8 was ordained as a Minister, five years after enrolling in a Bible School.

After her ordination, the gospel artiste started leading a congregation in worship services as well as coordinating other church staff members to ensure a smooth running of a service.

While announcing the news to her fans, the Mateke hitmaker expressed her excitement about her next journey as a Minister. She said her life has been a movie having moved from the secular world to being a pastor.

Following her achievement, the mother of two thanked her husband Samuel Muraya alias DJ Mo and members of her church for being supportive throughout her journey.

“I will be ordained as a minister of God’s word, a servant of the Highest God this Sunday and waaaa hiii ni emotional kwangu (this is emotional for me) 😭😭😭😭 God is not a man that He should lie. He chooses whoever and changes them to serve Him… My life is like a movie from the secular world to an ordained servant of God 😭😭😭 see God…… God’s GRACE IS Real,” she said she got born again in 2013 I started the Gospel music journey, five years later 2018 I went to bible school and graduated and now 8 years later 2021 am going to be ordained 😭😭😭😭 see God.”

Following her achievement, the mother of two thanked her husband Samuel Muraya alias DJ Mo and members of her church for being supportive throughout her journey.

“To my husband @djmokenya thanks for allowing me to go serve God and to my Pastor and mentors Pastor Kelvin and Jacky Ephraim God bless you all,” she said.