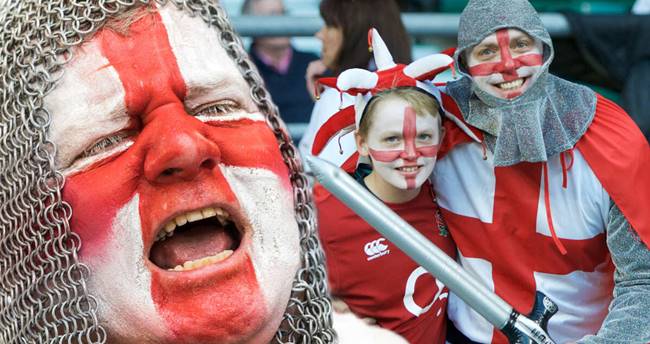 England soccer fans at the World Cup in Qatar will be prohibited from wearing crusader costumes for Friday’s matchup against the United States after FIFA warned such clothing could be considered “offensive against Muslims.”

The announcement from FIFA comes after video footage went viral of two fans wearing chainmail armor and the traditional English red cross being confronted by security Monday at Al Bayt Stadium in Al Khor ahead of England’s opener against Iran.

Both fans were seen surrendering their foam swords and shields to security.

In a statement quoted by the United Kingdom-based newspaper The Times, FIFA said “anti-discrimination colleagues” are asking fans not to wear crusader costumes, which “in the Arab context can be offensive against Muslims.”

A spokesperson said the decision was made as FIFA “strives to create a discrimination-free environment, to promote diversity across the organization and in all of its activities and events.”

A travel advisory from the U.K. Foreign Office urges Brits to familiarize themselves with “local laws and customs” that “reflect the fact that Qatar is an Islamic country.” Qatar is the first Islamic country to host the Cup in its nearly 100-year history.

“You should respect local traditions, customs, laws and religions at all times and be aware of your actions to ensure that they do not offend,” the advisory states.

FIFA’s announcement was roundly supported by groups such as Kick It Out, whose stated mission is to “put an end to all forms of discrimination within sports.”

“We would advise fans who are attending FIFA World Cup matches that certain attire, such as fancy-dress costumes representing knights or crusaders, may not be welcomed in Qatar and other Islamic countries,” the statement read.

John Barnes, a former England player and ESPN commentator, was among those who defended the ban. He even compared the Crusades — when the Roman Catholic Church and European powers fought religious wars for more than 200 years between 1095 and 1291 to regain control of Jerusalem and the Holy Land under Islamic rule — to Nazi Germany.

“You look at the situation like the crusader debate and the way that crusaders are viewed in that part of the world,” Barnes told Good Morning Britain. “It’s very similar if someone was to come to a football match and wear a Nazi uniform.”

The two fans stopped by security were quoted as telling The Telegraph they weren’t dressed as crusaders but as knights from the classic British comedy “Monty Python And The Holy Grail.”

Calling the move “ridiculous,” the men — who asked not to be identified — said they are British ex-pats who have lived in Doha “for several years” and have had “no problems with Muslims at all.”

At one point, the men were asked if they were “Muslim killers.”

“Of course, we aren’t crusaders,” one of the pair was quoted as saying. “We’ve lived here for years, and we have no problems with Muslims at all — we work with them every day.”

After nearly three hours, the pair were finally allowed into the match.

“It was ridiculous,” one of the men said. “We turned up, and the police first told us we couldn’t take the swords in, even though they are made out of foam. Then a captain came running after us saying we couldn’t wear the chainmail.”

“This is just total woke madness. I blame FIFA. You can’t wear anything nowadays without someone taking offense.”

FIFA’s announcement contrasts with its recent decision to allow rainbow-colored flags and hats inside the stadium after initially turning away fans wearing such clothing from World Cup events.

On Thursday, FIFA said the rainbow flag will “not be prohibited” going forward at World Cup events, and pro-LGBT colors will “no longer be confiscated,” The Independent reported.

For England fans, the tradition of wearing crusader outfits goes back at least two decades, inspired by the legend of St. George, the patron saint of England, who is fabled for slaying a dragon.

According to one version of the legend, George was a soldier stationed somewhere in the eastern Roman Empire when he happened upon a town with a small lake inhabited by a dragon.

The townspeople agreed, and legend has it the king later agreed to build a church where the dragon was slain.

England is set to take on the U.S. Friday at 2 p.m. Eastern after the Americans tied their opening match against Wales earlier this week.