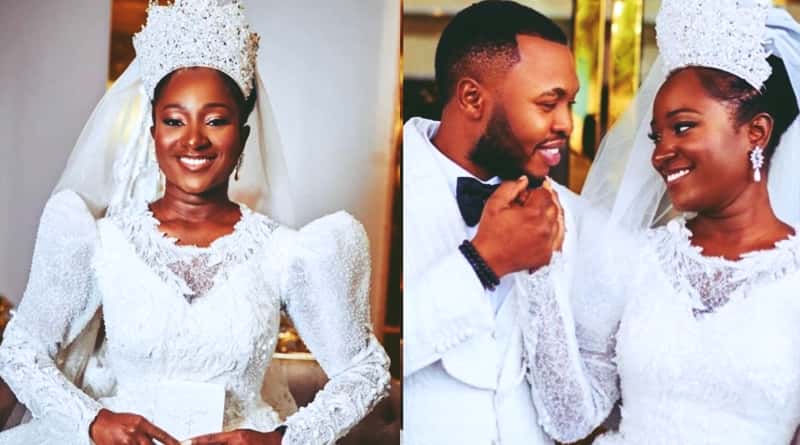 Deborah and Sam tied the knot on Saturday, December 17, in a lovely ceremony that was well attended by prominent personalities, including former President Goodluck Ebele Jonathan, Peter Obi, and Bishop David Oyedepo.

The couple had earlier held their traditional marriage on Thursday, December 15, and beautiful photos from the event was shared online.

Taking to her Instagram page, the excited new bride released stunning photos from the wedding, and pointed out that she carried a bible instead of the conventional bouquet, explaining that it’s a wonderful foundation to lay their marriage on.

Gushing over her wedding, Deborah wrote:

I can’t express how much a fairytale yesterday was.

@sam_hawthorn I love you so much. You’ve redefined love for me. I’m grateful to be experiencing life with you forever.

Thanks to @hudayya for this unbelievable and regal wedding statement dress and @makeup_360 for making me look like a Disney character.”

Deborah Enenche was born on 28 of March 1995. Popularly known as DeBee, she is a gospel minister and music artist from Nigeria.

She is also a creative Director at ‎Dunamis International Gospel Centre and the first of four children (Deborah, Daniella, Destiny and Paul-Daniel) of Pastor Dr. Paul Idoko Eneche, founder and senior Pastor of Dunamis Church.

Deborah Enenche is a graduate of Law from Northumbria University, a programme she held between 2012 till 2017. She also graduated from the Nigerian Law School, Federal Capital Territory Abuja Campus. She was called to Bar in the year 2019.

She is a member of the MARS Society Afro-Carribean Society Christian Union. She also holds a July 2011 award of the best in Fine Arts and Most Dedicated at the British Nigerian Academy. She won a July 2011 scholarship at the Northumbria University.

Deborah Enenche has performed alongside several gospel music ministers from across the globe, including renowned American worship leader, Pastor William McDowell at the 2020 Nation’s Worship, Abuja.