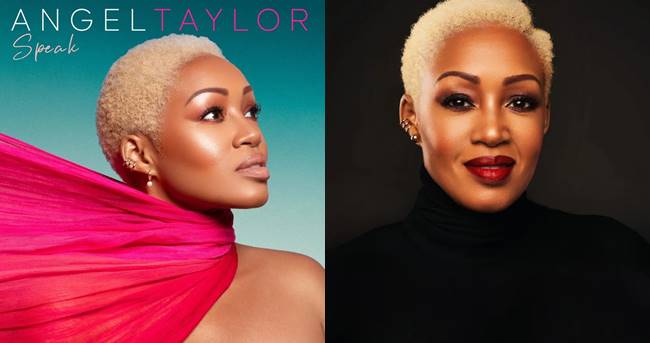 Trinitee 5:7 was known as one of the hottest girl groups of the early 2000s in the Christian and R&B industry.

Angel Taylor as a soloist, is keeping the bar high as she steps out on her own with the release of her newest single, “Speak”, along with her gospel brunch concert at City Winery Atlanta on September 18.

When asked about the new single, Taylor says, “The song ‘Speak’ has been in the works for some time. In 2016, I first called Donnie McClurkin because I wanted his blessing on my rendition of his classic song ‘Speak to My Heart’. With his blessing, I recorded ‘Speak’ and had my producers revamp it. I hope my audience loves it and is blessed by it as much as I am.” When asked about being a solo artist, she says, “I’m looking forward to the experience as a solo artist for the first time. This project has been years in the making and the music is so heartfelt and beautiful. I’m looking forward to this journey with all of our Trin-I-tee 5:7 fans and introducing my music to new audiences.”

Fans will also be able to hear Angel Taylor live at City Winery Atlanta on September 18! “I am honored that City Winery invited me to headline their Sunday brunch! I love soulful inspirational music and I can’t wait for fans of Trin-i-tee 5:7 to experience my show as a solo artist.

We are going to have so much fun!” Other special guest performers of the night include Jojo Martin, Keyondra Lockett, Keith “Wonderboy” Johnson, and Zaviel Janae.

Tickets to see Angel Taylor at City Winery, are available at citywinery.com. “Speak” is currently available on all streaming platforms.

Blazing the trail to inspire real people through music, Angel Taylor is bridging the gap between R&B, Gospel, and Pop music for an all-in- spiring crossover experience. Reminiscent of the soul-quenching music of the ’90s,Angel provides a soulful, loving, and fulfilling experience that is often searched for but seldom discovered. Longing for that feel-good sound,Angel is creating a getaway from reality that inspired her to create music. Growing up in New Orleans, Louisiana singing in her Southern Baptist choir is what introduced Angel to the impact- ful Gospel messaging and sound that she would later incorporate into her own music. Gospel is in her roots, and growing up singing in her church choir set the standard for the most important piece of her life, her relationship with God.

Beginning her career with two-time Grammy and BET Award-nominated, Dove and Stellar Award-winning Gospel group, Trin-i-tee 5:7,Angel evolved as an artist experiencing the challenges of pushing past the musical, visual, and performative limita- tions of urban and contemporary Gospel music. Being a member of Trin-i-tee 5:7 provided her many of her most life-changing moments such as performing for personal inspiration Aretha Franklin, Collaborating with Mary J. Blige and the Clark Sisters for a main stage Grammy-Award performance, and embracing the genuine stories of how their music inspired those who often felt shunned from their personal church homes.

Becoming a solo artist has always been a dream of Angel’s, and having the opportunity to share her heart, her thoughts, and her love for God, romantic love and all of the things that inspired her in the world is what she is focusing on in her upcoming projects. Angel’s latest single,“Speak”, is a fun, groovy song that takes listeners back to that feel-good sound that remains inspiring in Angel’s life. The lyrics discuss keeping God close, discovering the ability to hear from Him, and being open to what He’s saying in your life. Taken from a song she grew up singing in the choir, this song transports listeners to a great place in Angel’s life. It also serves as a sign of the current times. The current state of the nation is consumed with phones, social media, surrounding events, etc. It is extremely challenging to cut off the noise. Angel’s messaging is defining the importance of quieting everything around you and really focusing on that relationship with God, where you are, and where you want to be with your relationship with God and others in your life.